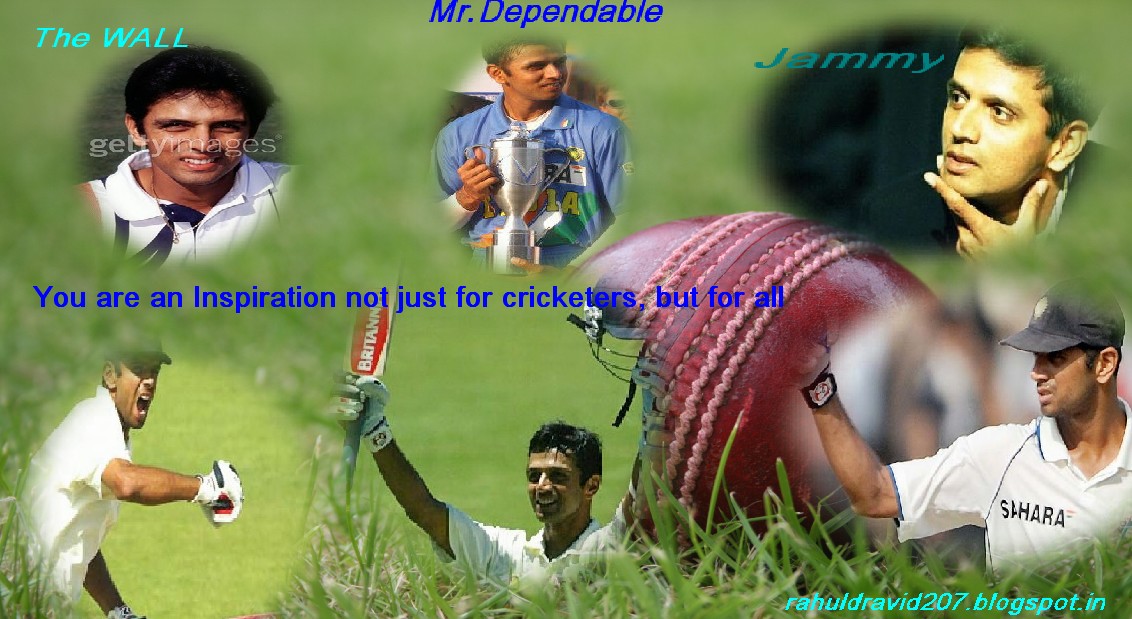 As we have seen about the first test of Pataudi Trophy in the last post, India lost their first test against England by 196 runs, despite Dravid's century. Now coming to the second Test (July 29- Aug 2,2011) played at Trent Bridge stadium, Nottingham, Our Indian captain MS. Dhoni won the toss and elected to field first. It was Andrew Strauss and Alastair Cook who opened the innings for England. India started off well by taking quick wickets of two vital England players Alastair Cook and Jonathan Trott which brought the score of England to 23/2. Then in came Kevin Pietersen. Strauss and KP had a 50 run partnership which boosted England's score to 73/2. Just between next 15 runs, England lost their next three wickets bringing down the score to 88/6. Praveen kumar took two among them and the other was taken by Sreesanth. At tea on Day 1, England's score became 124/8 after losing Bresman and Ian Bell. At that time as everyone was guessing that England's 1st innings may fall to 150, in came Stuart Board to surprise everyone with his knock of 64 in 66 balls which comprised 9 boundaries. His innnings brought England's score to 221 all out from 124/8. 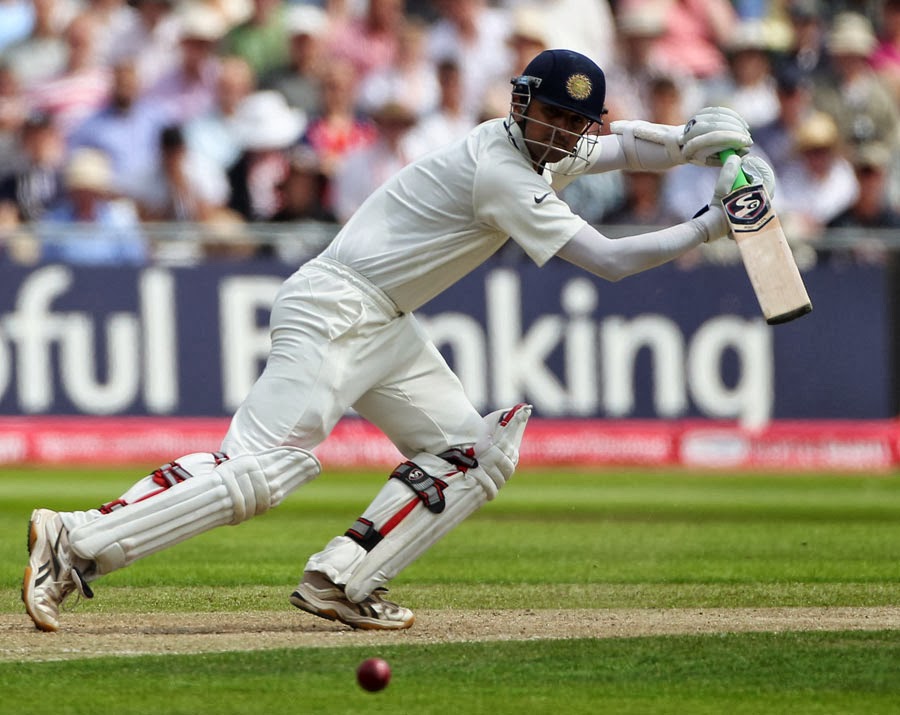 India started their 1st innings with only 15 overs to spare on Day 1. India sent in Dravid and Abinav Mukund for opening the innings. As Abinav was out for a duck, Laxman came in to bat along with Dravid. India finished Day 1 with a score of 24/1. On Day 2 there was a 93-run partnership between Laxman and Dravid. As Laxman got out for 54 runs, Dravid crossed his half century after lunch. Soon after that India lost Sachin and Raina. As the wickets was stumbling at one end, Dravid and Yuvraj kept up the scoreboard increasing. Yuvraj crossed the half century mark boosting up the score for India. Meanwhile at the other end, playing his temperament innings Dravid scored his yet another brilliant century after Tea on Day 2. That was the second hundred for him in that series(Pataudi Trophy 2011).

His innings of 117 runs comprised 15 boundaries which included some exuberant shots in the cover, square leg, long on, long off and at third man. It was a treat to all the cricket fans. Meanwhile at the other end Stuart Board of England took his career best of 6 wickets which restricted India's score to 288. Dravid was the ninth wicket to fall.

Another notable event took place in the second test on Day 3. There was a hotchpotch situation before Tea interval on Day 3. The last ball bowled before tea has created that. Ian bell who was finished running and returning back to the pavilion has been termed with run out whixh he was actually not aware about that. Then before Ian Bell and Andrew Strauss could meet the umpire to enquire about this , Dhoni has shown his sportsmanship by asking Ian bell to continue bat. This decision has got more praises for Dhoni which has to be followed by every player.

Later on England had batted flamboyantly and scored a huge total of 544.Then India chasing a target of 477 stumbled for 158. Hence once again Dravid's innings gone in vain. But on his career front, this century was his 34th century which came in at right time.


Birla Institute of Technology and Science (BITS Pilani) is one of the well known deemed institutions in India. The institution has its campuses at Hyderabad, Goa, Pilani and in Dubai. This institute is said to be fully residential and it was started in 2004 and was officially inaugurated in 2006. The first ever convocation of the institute in Goa campus was said to be held in 2011. And the convocation for the year 2013 was held on 11th of this month(11-Aug-2013). The highlight of the convocation ceremony was the presence of Mr.Consistency 'Rahul Dravid' :) Just imagine how lucky were those 2013 batch graduates of BITS !!!!! 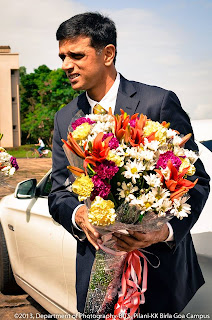 It is obvious that every graduate would be delighted about his/her convocation day, but that day at BITS with Rahul Dravid as chief guest would have been a double delight for everyone there. To have such an inspiring person who has earned respect both on and off the field , is really a remarkable and memorable moment for all those who aspire to succeed in life.

Here I'm sharing his speech which lasted only about 12 mins, but he has conveyed his message eloquently in that short time.

The Indian Cricket Team toured England for the season July - September , 2011. The tour comprised of four Test matches, five One Day Internationals and a lone T20 battle. Before the start of the Test match series 'Pataudi Trophy' the team had some first class matches. Coming to the first Test (July 21 - 25, 2011) at the Mecca of Cricket, 'Lord's stadium'-London, it was the 2000th Test match in the international cricket. India won the toss and elected to field first. England scored 127/2 at the end of Day 1 play. Meanwhile the match was interrupted with intermittent rains. There was a blow to the Indian team at the end of Day 1 as Zaheer khan suffered from hamstring injury. At lunch on Day 2, England scored 217/3 with Pietersen and Bell playing at their best. After lunch, Dravid kept the wickets since Dhoni tried his hand in bowling. Dhoni has bowled 10 overs in that match (both the innings). Whenever Dhoni went for bowling, Dravid did his best in wicket-keeping once again stood by his team whenever they are in need of him.

At one end , Praveen Kumar was bowling at this best and took a five - wicket haul and at the other end, Pietersen was playing his temperament innings hitting the ball at right areas to reach his double century which had boosted the score of England. England declared the innings at 474/8 after tea break on Day 2, where Kevin Pietersen was unbeaten at 202. Then openers Gautam Gambhir and young Abhinav Mukund started the first innings for India. At the end of Day 2 India were 17/0 at stumps. On Day 3, India had quite a normal start with openers shared a 50 run partnership. Then gone the wicket of Gambhir when India was at 63. The very next wicket of Mukund went quickly and India lost two wickets before the lunch on Day 3.

Hi all. Today I would like to share one of the wonderful speech of Dravid at the Sharada Mandir school at Goa last year. Rahul Dravid has been invited for distributing the Annual awards to the students of Sharada Mandir School on August 4th,2012. There during his speech, he shared three most important factors with the students that has helped him in his career and life. 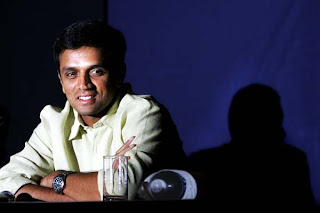 Image Source : My collections from the Web

Amidst that entire speech, my favorite part is where Dravid shared his own experience. Since Dravid is already known for his on-field patience, here's an incident where he felt and learnt about patience off the field as well.

Dravid said "My wife and I have built a new home with a lovely garden which houses lovely bamboo trees. I got reading on the Chinese bamboo and learned that the tree takes 5 years, 3 months to grow to its whole height of 80 feet. Yet, for the first 5 years, you can only see a tiny green shoot, but in the next 90 days, it grows into a full-fledged tree. But in those first 60 months, it is growing its strong network of roots underground, to support the tree. In an era of instant gratification, we settle for shorter trees, but remember patience has its reward. These are your years of growing that strong network of roots but be sure when you finally achieve your success, people will call it 'overnight success'. If only they knew of the Chinese     bamboo!"

I hope this particular part of his speech would have been very motivating and inspiring not just for those school children but also for all. This one added some more hope to practice 'Patience'.


Sir Donald Bradman(1908-2001), one among the greatest Aussie players who is well known for his highest batting average of 99.94 in the Test cricket has almost played two decades of cricket in the era of 1928-1948. During his cricketing era he has scored 29 centuries of them 10 went on to double centuries and 2 went on to triple centuries. He is one of most respected batsman of all time who has earned a huge number of fans even in India. It won't be a surprise for us, as we all know that our Indian fans always respects the spirit and the quality of the game despite whatever team is playing.


Cricket Australia have started an event named 'Sir Donald Bradman Oration' in the year 2000 to honour the contributions of Sir Don Bradman to this game. The inaugural oration was delivered by John Howard the Honourable Prime Minister of Australia. Then the 9th Oration was delivered by none other than our 'Mr.Dependable- Rahul Dravid' . He became the first non-Australian player and the first ever Indian cricketer to deliver the Sir Don Bradman Oration on 14th December,2011 at the Australian war memorial, Canberra. In his terrific and admirable speech he has mentioned the values of Sir Don Bradman, the bond between India and Australia, the tradition and background of Indian cricket and some of his views on the future of the game.


Hi all. Here in this post I'm sharing the video of Rahul Dravid's interview with TCS CEO - N.Chandrasekaran in their 'TCS Annual Leadership Meet - Glitz 2012'. It was quite an interesting interview between two greats in their respective fields. Here both share their experiences in their own aspects. The way Dravid answers for a question on handling pressures and stress was quite inspiring. I hope it comes under the second part of the video. Above all I enjoyed the documentary on Dravid that was displayed at the beginning and at the end of the meet. Any one who missed this interview can enjoy it here.

Here's the video in three parts :

sushmitha
An IT graduate who is passionate about Writing and Journalism. An ardent Nature admirer and a Cricket fanatic.

This work is licensed under a Creative Commons Attribution-NoDerivs 2.5 India License.